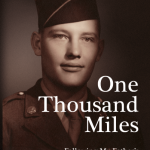 One Thousand Miles is now available on Amazon.

World War Two shaped Matt Matthews even though he was born twenty years after it ended. As a kid, he was afraid he’d have to do what his father did in the 106th Infantry Division in the Battle of the Bulge. As a young adult, he was afraid he wouldn’t. If his father’s silence about war and being a POW said it all, what did it say? That silence and Matthews’ efforts to fill in the blanks molded his evolving definition of manhood and efforts to influence and love his own three sons.

In the summer of 2011, Matthews, his wife, and three boys traced his late father’s WWII footsteps the thousand or so miles from where he was captured in Germany during the Battle of the Bulge to the Clyde River in Glasgow, near where he and 10,000 other seasick American GIs arrived on the RMS Aquitania. Sixty-seven years after his father’s journey, Matthews unwraps spiritual insights about loss, fatherhood, and overlooked graces of daily life.

“Between Frederick Buechner’s profound autobiography Sacred Journey and Russell Baker’s warm and humorous Growing Up, Matt Matthews’ One Thousand Miles charts a compelling journey all its own through the past and the present. Beautifully written and meticulously researched, this engaging tale of a son’s pilgrimage into the heart of his father’s story is a treat for believers and non-believers, for anyone fascinated with WWII and the generation that endured it, with the metes and bounds of family and memory, with history; in short, for everyone.  This is a wonderful book.”
—Janet Peery, author of The River Beyond the World,
a National Book Award Finalist.

“Matt taps into my own longing to understand and connect with my three-time war veteran father and my own need to make sense of that war’s enduring legacy . . . This is a “must read” for all children and grandchildren of these Silent Generation war heroes—and for families of every man and woman coming home from a modern day war zone.”
—Mark W. Lenneville, Chaplain (LTC), US Army, (retired)

← Breath: 52 reflections for those who care for the dying